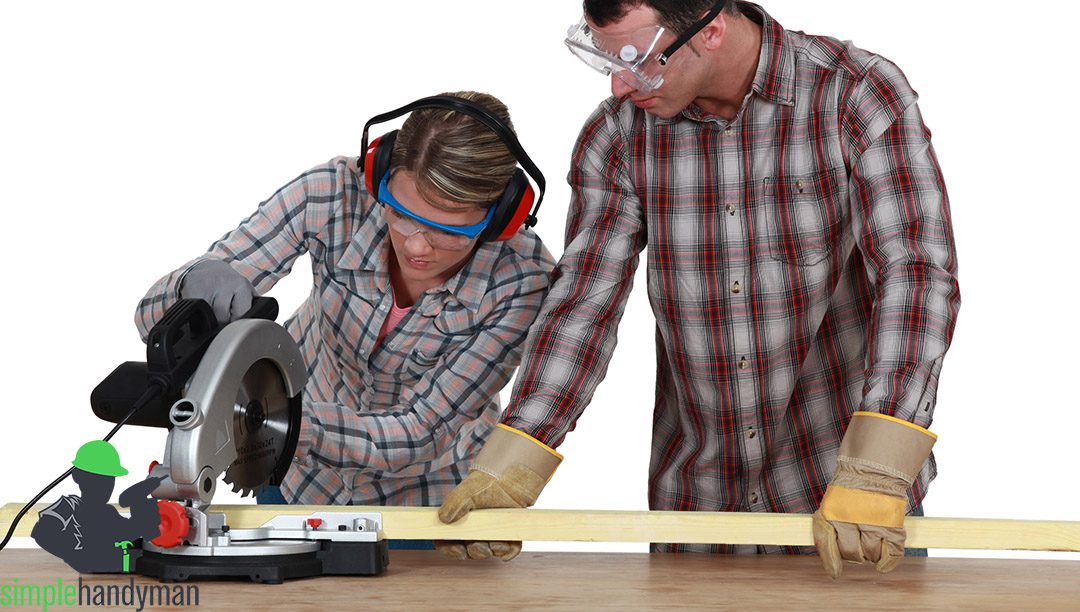 Do you find it an overwhelming decision to pick the best compound miter saw for your workshop? You are not alone. Given the numerous options in the market, it might often be a tough choice. I have carefully picked out the best 6 compound miter saws that come with good features making a great value. 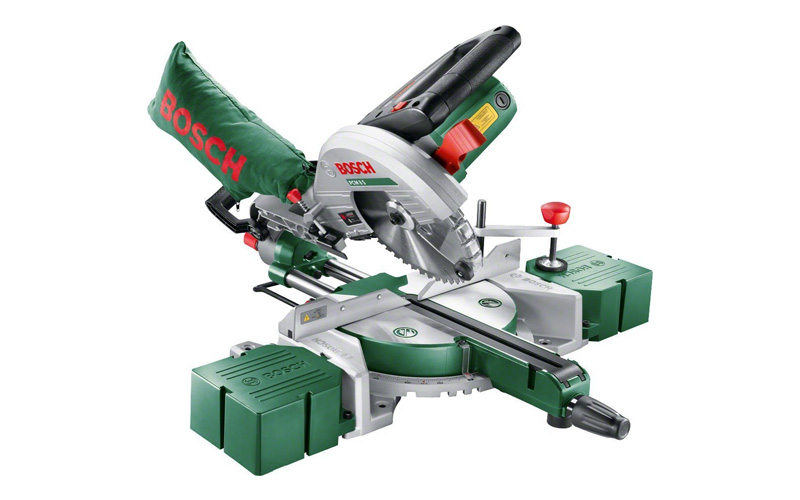 Pros
Cons
R
To conveniently ensure the precision of cuts this is the best compound miter saw with laser guide
R
There is a convenient work clamp to help you hold the workpiece securely in place
R
Blade changes in this saw are very simple and there is also a spindle lock mechanism for added safety

The laser is a neat feature but when there is a lot of fine dust blocking the visibility the laser doesn’t help much.
For the basic user, this is the best value compound miter saw.Weighing merely 7.9kg this is a compact compound miter saw which is also quite powerful. If you need to buy something that would deliver powerful cuts then the 1200W motor does the work neatly. And with the rpm of 4800, you can get a precise finish. The cutting height that you would be able to achieve with this saw is 60mm as the saw blade that has a diameter of 218mm.
More information Bosch PCM 8 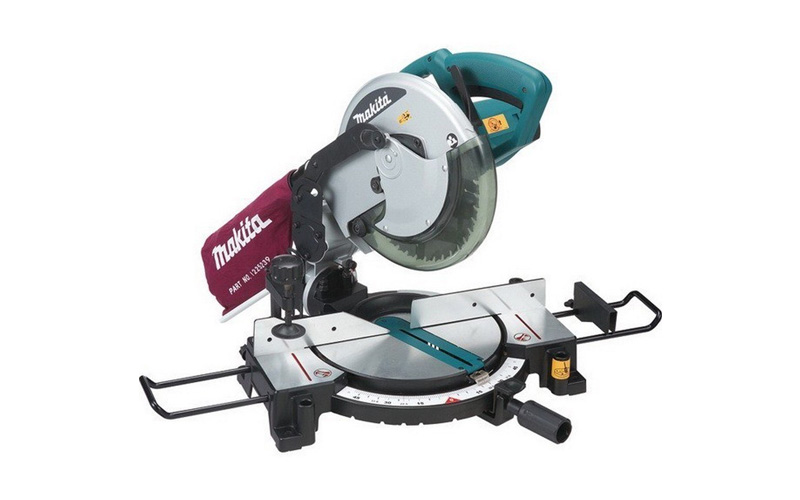 Pros
Cons
R
There are 9 settings for positive stops for better-angled cuts
R
The inclusion of the electric blade is useful for those instances where you would have to abruptly halt the cut
R
When you are changing the blades there is a shaft lock to ensure safety and to make sure that the shaft stays in place to easily install the blade

The overall construction of the saw is something that slightly lacks behind the others in the market. This might not feel like the most durable one but it definitely does its work accurately
This is one of the best miter saw for beginners with the easy to operate design. There is a powerful 1500w motor. This 10-inch compound miter saw comes with a sturdy and durable die-cast aluminum base. Right from setting up the saw to using it to changing the blades this one is pretty straightforward to handle
More information Makita MLS100 240 V 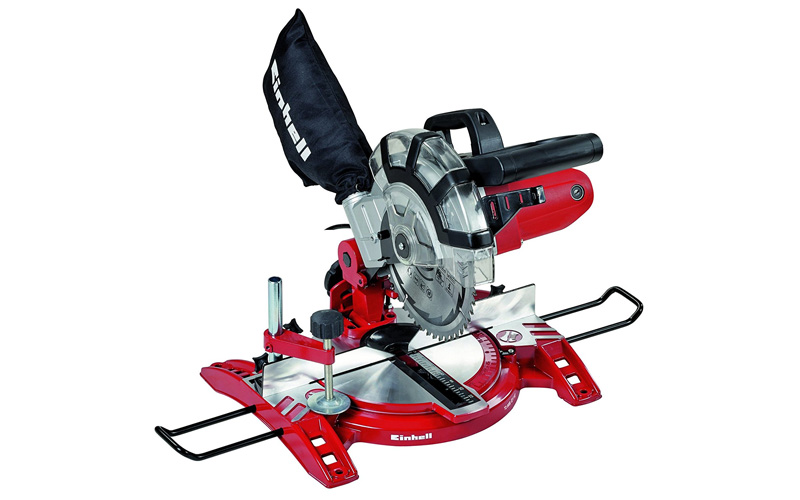 Pros
Cons
R
The angle adjustment provided on the work table allows you to make precise changes when you are performing angled cuts. This adjustment can be done single-handedly
R
To add to the convenience there is a dust bag provided to collect sawdust while using the miter saw

Setting up the machine for the first time might take some time. But after that using the machine is pretty simple
This is a miter saw for homeowner and professionals alike. With a precise 5000rpm cutting this one can make it easy to finish your woodworking in no time. The carbide saw blade achieves fine cuts. It can be used to cut laminated panel, wood as well as plastic surfaces. For easier adjustment of the workpiece when working there is a convenient turntable.
More information Einhell UK TC-MS 2112 1600 W 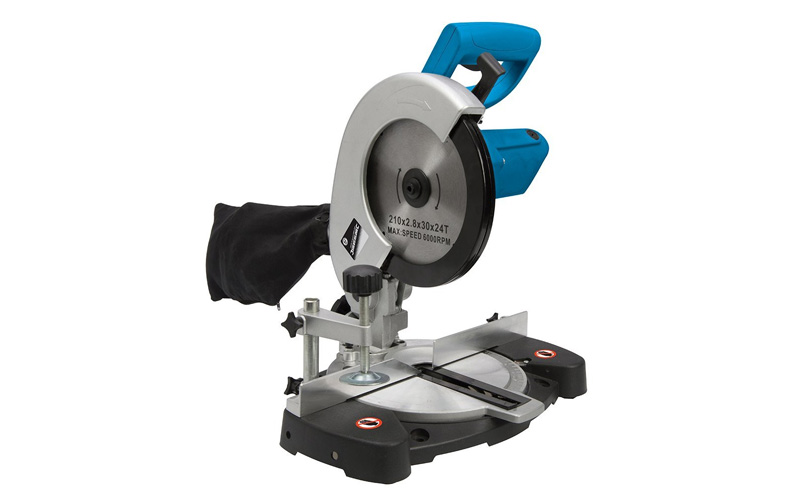 Pros
Cons
R
This compound miter saw takes up very little storage space as it can fold compactly
R
While using the saw you can collect the fine dust from the surface using the dust collection port provided. And this dust can be collected conveniently in the dust bag included in the package
R
Bevel and the miter angle can be calibrated very easily to improve the precision

This is another compound miter saw that is not suitable for some heavy woodworking and continuous use. It suits the basic DIYers however
This is an 8” miter saw that comes with a 1400W motor. The 24T TCT blade is robust and allows you to easily cut wooden surfaces. Adding to the safety there is a metal blade guard provided. To enhance the stability of performance this compound miter saw comes with rear stabilizer.
More information Silverline 262705 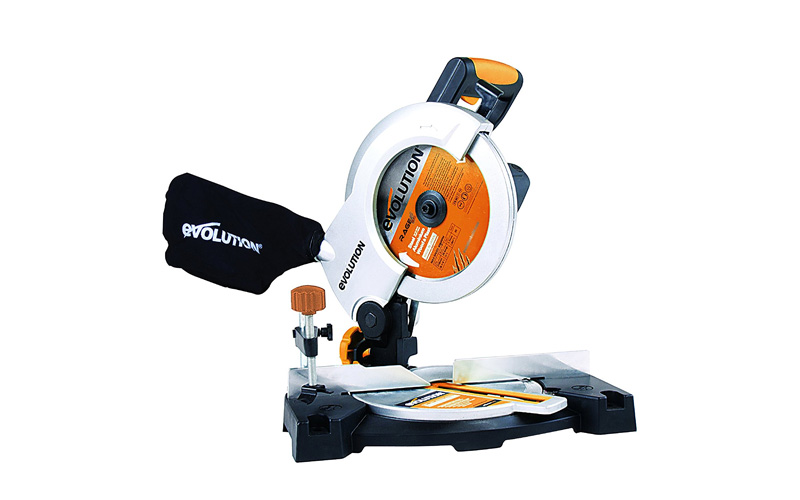 Pros
Cons
R
Besides the powerful performance and the features, this one comes as a portable option. It is also easy to fold and store compactly
R
If you are looking to make cuts on a tilted surface you would be able to do that as this miter saw comes with the variable bevel option

If you are looking for a professional quality miter saw this might not be the best option as it carries a slightly lighter 1100W motor
With the ability to cut a variety of materials including aluminum, steel, plastic, and wood this is one of the most versatile tools. You could even use this miter saw for those instances when you would have to cut a wooden surface that contains nails. And the best part is that it can easily cut metal without the risk of sparks. The precision of the miter saw is ensured by providing a top clamp. This miter saw allows a cutting depth of 50mm.
More information Evolution RAGE3-B Multi-Purpose 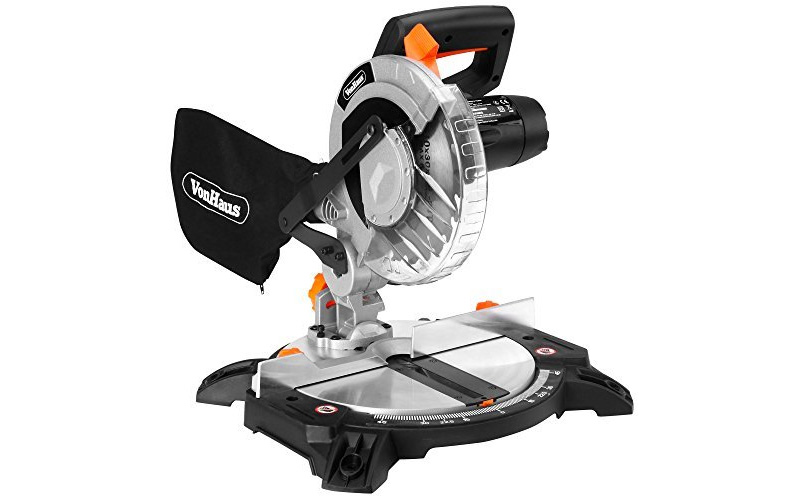 Pros
Cons
R
The cutting blade included in the saw is robust and can handle some heavy load without any damage
R
There are easy bevel angle adjustment settings provided on the miter saw on the right and left sides. This allows a free swing on both the sides to make the perfectly angled cuts
R
There is a plastic blade casing provided to reduce the blade exposure area and to ensure the user’s safety

This is a great tool for basic use but heavy professional users might sometimes experience heating issues
This is a 1400W motor powered compound miter saw. There is also a sliding miter saw variant that comes with a more powerful 2000W motor. The cutting depth can be easily adjusted. This can be set up to 5.5cm. It also comes with a dust collection bag attached to collect the fine dust during operation.
More information VonHaus 1400W

When it comes to miter saws there are several variants. The compound miter saw is the one that comes with a pivoting blade. The blade on the pivot joint would be able to swing to the left and right. These are portable options that are known to be versatile additions to the workshop. The pivoted blade allows angled cuts with perfection and ease unlike no other. This is what makes them indispensable for a lot of reworking around the house. There are also some models that come with a lot of customization option to help you obtain the perfectly accurate professional cuts. Basically, when you would plan to make angle cuts, especially on two different planes then the compound miter saw is what you need. There are also sliding compound miter saws that come with a sliding arm in case you need one. These are great for the hardcore users. But most users would be able to manage perfectly well with a basic compound miter saw. 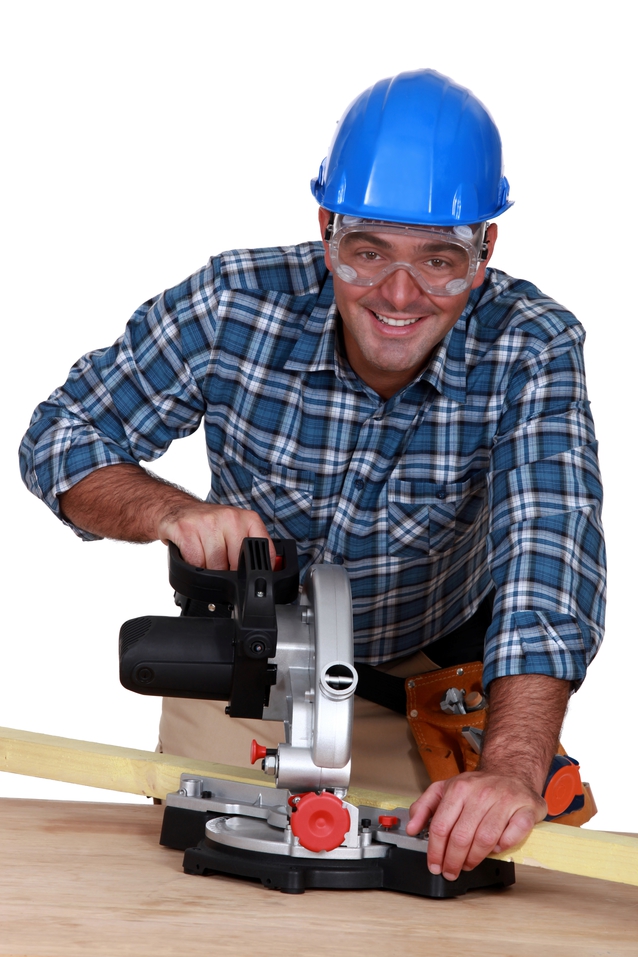 The type of blade, the size, in particular, should be the main aspect to look into. The blade is what influences the type of cuts and the dimension of the cuts that you would be able to obtain with the compound miter saw. There are several blade sizes to choose from. The most common sizes are 8, 10 and 12 inches. Depending on whether you need a thin cut or a thick cut and the length of the cut, as well as the actual material that you would be cutting you can choose the blade of the miter saw. If you are a basic user who would need only small cuts then a smaller diameter blade would be sufficient. But for the professionals, a 12-inch miter saw would be the best choice. This is another feature that you might find in some compound miter saws. This is the feature that allows you to vary the depth of the cut obtained. This is achieved by varying the blade’s height. Rating of the motor is a factor that determines the power of the tool. This would determine the load you would be able to handle with the miter saw. If you are looking for a higher cutting power that can be used for professional work then you would need a more powerful motor. The amp rating would also be high in this case. There are manual guides that people often use to obtain straighter cuts with better accuracy. But then we now have compound miter saws with more convenient features like inbuilt laser guides. These can be directly projected on the work surface so that you would be able to view where you are cutting and ensure that the cut remains straight. So, this would be a useful feature to look for in your compound miter saw. Once the motor runs and you begin cutting depending on the rpm, the time taken for the blade to come to a halt might vary. So every time you press the stop button there might be a slight delay. But there might be cases where you might need to stop the blade immediately, say when you notice that the cut has deviated a bit. For this, if your compound miter saw has a braking mechanism it would come in handy. There would be an electric brake included. This would help reverse the polarity of the current flow in the motor and this would happen soon after the trigger is released. So the momentum would be paused at once with a negligible amount of delay. This is not a feature that all compound miter saws possess but it would be a great one if you are looking for perfection in your woodworking. The ease of changing the blade is a feature that is often ignored. But this is another feature of convenience. Besides featuring a simple blade changing mechanism there should also be safety features incorporated. Some of the safety features that you might find are the availability of a lock to prevent accidental turning on of the shaft. Look for the design of the saw. There are some which come packed with a plethora of features but might be difficult for a beginner to use. But there are also those that come with the easy single-handed operation. The position of the trigger, the design of the handle and the grip on the handle would all determine the ease of using the compound miter saw. Having dust blowers or vacuums, displays to view the settings and several other handy features might be included in some compound miter saws. These are the additional features that might further improve the quality of the work being done and the ease of using the machine as a first timer.

Hope the best compound miter saw reviews helped you gain an insight into what exactly to look for. Safety features should be the ones to first consider especially when you are a beginner with miter saws. Look for those that come with the sturdy and reliable casing for the blades. The ergonomic user-friendly design would make sure that you can use the miter saw without any hassle and obtain a professional cut with the least amount of efforts. Choose the right blade size and also take into account the teeth design to determine the type of cut and the depth of the cut that you would be able to achieve. This would also help determine the smoothness of the cut surface for a cleaner look.
Create your own review
Best Compound Mitre Saw
Average rating:   0 reviews